Why Most Cross-Functional Projects Fail...and What You Can Do About It

There’s a dirty little secret about cross-functional projects: they usually fail. You might ask, “How can this be?” After all, cross-functional teams are a common practice among companies large and small, all over the corporate world.

Why are so many cross-functional projects doomed to failure?

Cross-functional teams have been around since the 1950s, when an American insurance company, Northwestern Mutual Life, brought people together from their financial, actuarial, investment, and other departments to study the impact of computers on their future business.

This first cross-functional team gave them a significant competitive advantage as the use of computers became standard operating procedure. Seeing his hunch proven right, Northwestern Mutual Life’s CEO instituted cross-functional teams across his organization, increasing its market share and profitability.

So why are so many cross-functional projects doomed to failure? What are the keys to success? We’re going to look at project failure numbers, the stats, and the naked truth of why some cross-functional teams thrive, and others die like oranges in a sudden Florida frost.

The Truth About Project Failure

And note, that the success or failure of many cross-functional business projects isn’t measured because their budgets are relatively small – so they don’t fall under the purview of a PMO or any measurement mechanism. They simply run out of steam due to organizational changes or run out of budget, or the company changes direction - having used an abundance of time and energy on the part of many different departments.

Check out these frightening, disheartening stats. According to Strategy and Business:

On that last point, isn’t diversity of opinion the point of a cross-functional team? 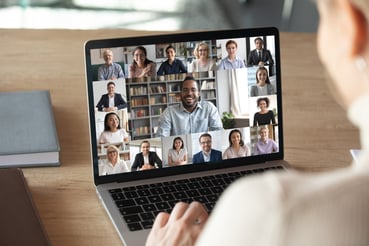 But hey, it isn’t all doom and gloom. Cross-functional teams do succeed when they’re properly planned and managed. Some techniques will greatly raise the probabilities of success.

Salesforce commissioned a study that found that 86% of cross-functional team members said that a lack of collaboration and poor communication are responsible for workplace failures. In the same study, 97% of these people claimed that poor alignment directly impacts the success of each project.

Subscribe to our blog to learn more tips for working in a virtual team.

How to Beat the Odds

Don’t leave a meeting without everyone understanding what needs to be done.

At Virtira, we find a virtual facilitator can provide the oversight and accountability needed to enable your cross functional team to reach their goals. Let’s look at some concrete ways to increase a cross-functional team’s chance of succeeding.
Managing virtual teams comes with unique challenges. It's new for many leaders as we move into the new remote normal. Check out The Ultimate Guide to Managing Virtual Teams to get started, then try these tips:

Everyone has a full-time job outside of your project. You need to follow up and make sure that they are completing their action items – before these are due. Designate someone on the team to do this or rotate this around the team.

Don’t leave a meeting without everyone understanding what needs to be done, what decisions have been agreed to, and what risks exist. Record the things anything your team will need so they can build understanding or use the minutes as a reference.

Ask for a status

Do a status update at the beginning of every meeting so that everyone knows what is on track and off track. Get your teams on the same page right away to avoid wasting time and miscommunicating.

Use an online dashboard

Across time zones, the ability for people to add issues, update status, and generally contribute when others are offline is invaluable. Automated action item reminders also help to make sure everything gets done on time. Need help getting started? Check out our examples.

Keep an eye on the KPIs most relevant to your team’s success. Quantifying your success metrics will give you a true picture of where your team stands, much more than a “gut feeling” ever will.

Understanding extended stakeholders early in the process is critical. A RACI will highlight who has to approve your project at various gates. This allows you to proactively assess if there will be risks that will derail or even cancel the project – due to a key stakeholder withholding approval for a key deliverable.

Be willing to pull the plug

Many managers can’t bear to admit that their cross-functional team just isn’t going to reach their goals. They bravely carry on instead of realizing that the team’s members and resources would be better used elsewhere. It’s the sunk-cost fallacy; throwing more money at a lost cause because they’ve already invested a large amount. If something isn’t working, just move on.

Virtira’s team knows how to form, nurture, and lead teams of all shapes and sizes. We’d love the chance to help you with your project in any way possible.

Contact us. We look forward to hearing from you.

The Art of Managing a Cross-Functional Team

Harvard Business Review did a study which found that a a whopping 75% of cross-functional teams ...
Read More

How Progressive Managers are Preparing for Permanent Virtual Teams

When your team goes virtual for good, it’s harder for it to work cohesively as a unit. As I write...
Read More

Four Strategies to Solve Tech Problems While Working from Home

When the pandemic hit, how many news shows, that were largely limited to in-home remote interviews,...
Read More